The H+P Men’s A team put together an incredible week in 2019.

For the club, the week was a roller coaster of expectations as the roster was reconfigured multiple times.

“The week started off with a decent 1:17 half marathon, but then we lost one of our faster guys in the 15K due to a back injury. Nick did his best to fill in last minute, but he was too beat up to run close to his best and in one stage we lost approximately 7 minutes. The week was salvaged by massive PB performances by Graham (2:03 Bechtel) and Greg Cartmell (58 Wilmot) back-to-back. Greg Dyce hung on for dear life at Chicopee where he salvaged a 2:18 (about 8-10 minutes slower than his ability) again showing the challenge of this event. Brendan ran a solid 35 10K to put us 1 minute behind record pace which meant Aidan would have to PB the marathon by 4 minutes to make it happen – which he somehow did with 43s to spare!”

At 10:48:33 @AidanRunnerford is A) third fastest man to ever run @ENDURrun B) eighth fastest time all-time C) fastest 2nd place, ahead of Rich Tremain 2003 D) 37 minutes ahead of is own 2018 rookie performance https://t.co/zb3vH0scZ8 Wow! pic.twitter.com/xHFQ9UmsFF

Anyone who has been following this pursuit knows it’s a hard task. Unlike Ultimates who spend the year training for ENDURrun as an ‘A’ race (consider that Aidan beat the team), Relay teams require having multiple athletes available for weekday morning stages, who all peak in condition and performance in August. It’s incredibly difficult.

“We thought we had a good chance in 2013 but ended up missing the record by over an hour! We quickly learned that even if we had individuals more than fast enough, it was a challenge to line up 7 people for such a diversity of stages with no back-ups if injuries or blow-ups happen mid-race.”

The team took an adjusted approach in 2019 by bringing along 8 athletes to allow for a backup, which was required before the first day was over. The roster of eight included top club performers mixed with stage experience and availability.

“Generally these 8 athletes posted the fastest times across the board from 5K- marathon in the ~8 months leading into the race, and they also proved fitness in the 4 weeks leading in. Five of the 8 have run a 15-something 5Ks, and the ones who didn’t have major course experience or impressive recent performances at longer distances (i.e. 2:37 marathon for Greg C, 5x Chicopee for Greg D).”

It’s also impressive to note that H+P was able to compose the roster exclusively of long-term club members.

This comes in the context of H+P teams setting and breaking their own Relay records for several years in the Female and Masters divisions, which is impressive in its own right, but also a testament to the difficulty of the Open record. H+P now owns the top 9 fastest female teams and the top 8 fastest masters teams.

“Both of these performances were awesome to see. The men’s masters team really is starting to go next level. We now have 3 men who can break 17 for 5K and a few more knocking at the door. There still is room for that record to get faster, but that margin is getting very slim because of how fast these boys are getting. The women’s team knocked their race out of the park. Despite missing our fastest runner of all-time in Erin McClure, these ladies had consistently strong performances across the board to crush the event record. Vicky Siemon was a huge asset with her 1:25 half and last-minute 2:18 Chicopee performance. With adding Erin back on the team, and with all of these women in general getting faster, I still think there is room to see this record plummet.”

One other fun dynamic to this record comes from the unique pacing rules at ENDURrun, where Sean and Gregory joined in for the second half of Aidan’s marathon.

“We ran consistent ~4:01 K’s all the way through to hit a near perfect even split marathon [+6 seconds]. It was insanely exciting and impressive to experience him pulling it off and solidifying the record as it happened.” 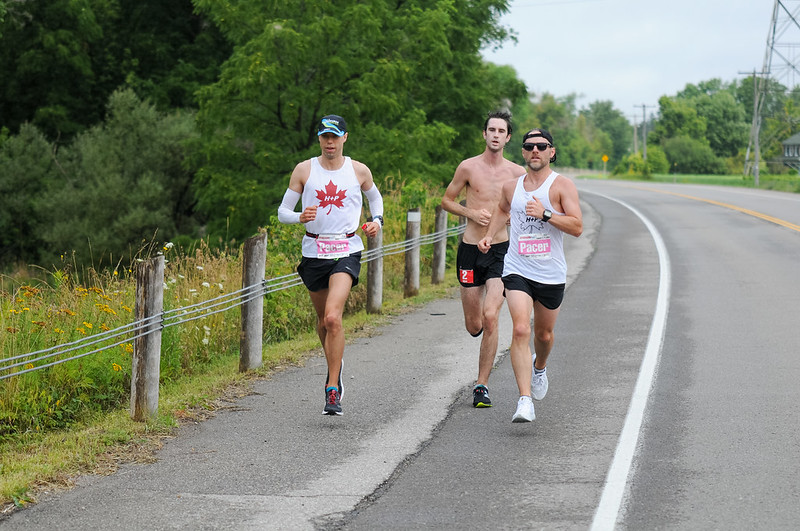